GMOM t-shirt Get Money Out Maryland 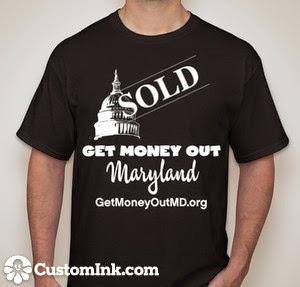 Posted by Practice Democracy at 9:33 PM No comments: 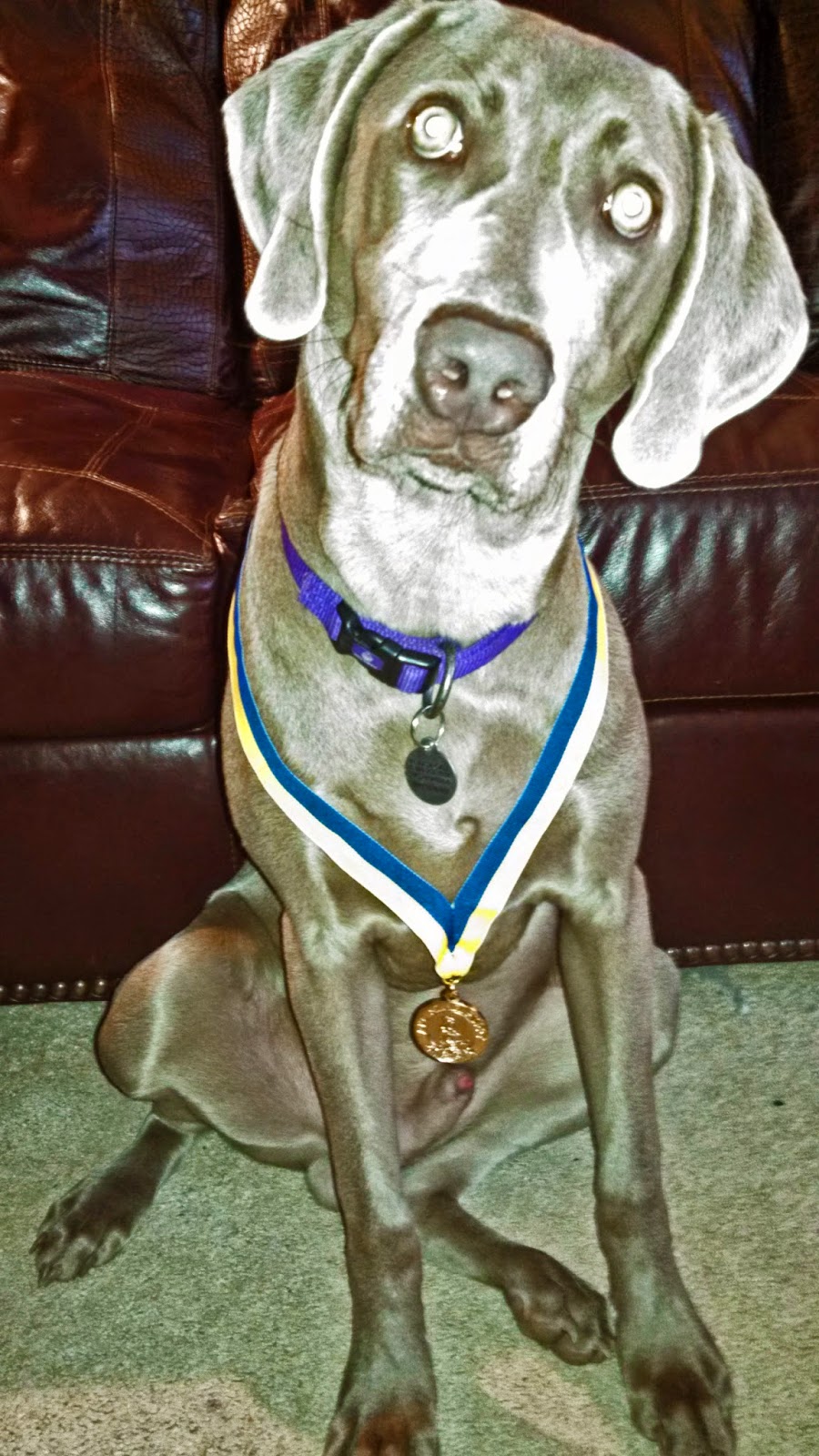 Posted by Practice Democracy at 9:43 AM No comments: 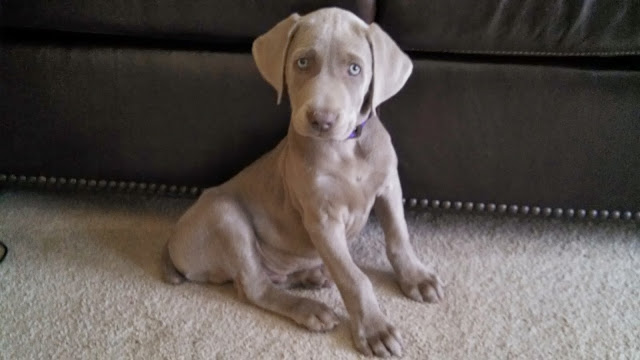 Posted by Practice Democracy at 11:18 AM No comments: 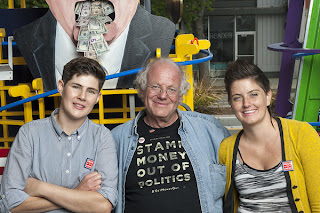 Let’s figure out how to go about restoring Democracy. This is an idea that is catching on across the country.  And, although Tea Party folks and Occupy people were the first I heard talking about this issue the discussion is now spreading into more moderate political discussions.

The Citizen’s United ruling is approaching its third anniversary. Grassroots organizing to overturn it has been slow, but definitely building. That decision expanded the First Amendment rights of corporations, again! Some opposed to the Citizen’s United decision are using the term “corporate personhood” to describe their feelings of disagreement with the Supreme Court. Others see it plainly as judicial activism.

The term: “corporate personhood”, according to Anthony Kramer’s article on Demos, “…tends to conflate two distinct legal concepts. He explains why we need to understand the difference between “legal personhood,” and “the notion that corporations have rights protected under the U.S. Constitution.” They can and should have some rights, but should it be an American principal that natural born persons and artificially created corporations are equal under the law? Is this where we are headed?

David Cobb, the founder of Movetoamend.org, is a spirited and passionate speaker on the topic of restoring Democracy clearly says he believes that we are now ruled by corporations. If the idea that “money is speech,” and that corporations have the same legal rights as natural born human beings we are all doomed to a life of economic slavery to those who own the corporations. Maybe some of us or most of us already are.

What most constitutionally aware American voters are saying is that only natural born people were considered to be citizens with unalienable right when the Constitutional framers were working out the details of that document.

The original purpose for a corporation was to address the idea that a service to people was missing and it could be addressed by a charter granted by a government. The Massachusetts Colony, for example, was a charter granted by the King of England for the purpose of creating profit for the share holders of the corporation as well as making it possible for the survival of the colonists. This is what corporations are about. They are not natural born people, so they do not have the right to vote…yet. The Supreme Court could do that in another instance of judicial activism. And yes, the Citizens United decision was an act of judicial activism.

Some will read this as an anti-corporate article, but I prefer to think of this as a pro-democracy discussion. Our Democracy is inching toward decline. If we do not remain vigilant the institutional entities outside of our power to vote will whittle away at our unalienable Constitutional Rights until we have them no more. Think about it: Move to Amend.

March 1, 2013 - Annapolis Maryland. A rally organized on Lawyers Mall in the state capital by Marylanders to Prevent Gun Violence was organized for thr supporters of SB281 Firearm Safety Act of 2013. This bill was introduced at the encouragement of Governor Martin O'Malley.

1. Require a license to purchase a handgun with appropriate age restrictions, mandatory safety training and fingerprinting, in addition to the current background check done by the Maryland State Police.  Research indicates that a license-to-purchase requirement is associated with significantly lower levels of intrastate gun trafficking. A license to purchase would not be required for hunting rifles and shotguns.
Seven states now require fingerprinting before a firearm purchase: California, Connecticut, Hawaii, Massachusetts, Minnesota, New Jersey, and New York.
Feb. 20, 2013 poll shows that 81% of Maryland voters support the licensing of purchase of handguns. Read more.

2. Limit Magazine Capacity to 10 Rounds.  Maryland currently allows up to 20 rounds per magazine.  The proposed legislation would reduce the allowable magazine capacity from 20 rounds to 10.

3. Ban Military-Style Assault Weapons designed to kill and inflict the maximum amount of human carnage.  Maryland currently bans only 15 enumerated assault pistols, but allows for the sale and possession of high-capacity, military weapons designed to kill.  MPGV supports efforts to ban these assault weapons that are designed for the battlefield and have no place in our society.
4. Provide the Maryland State Police with the authority to regulate firearm dealers and require that a licensed dealer keep records of all receipts, sales, and other dispositions of firearms affected in connection with the dealer’s business.

The rally was put together by organizer Vincent (bka "Vinny") DeMarco is a long time advocate for public health causes including reducing teen smoking and gun violence and expanding health care access. 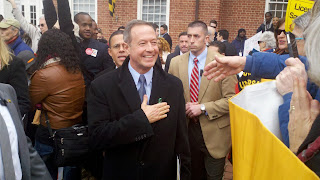 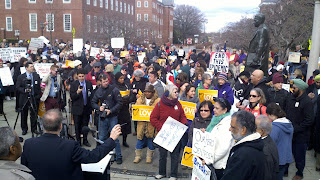 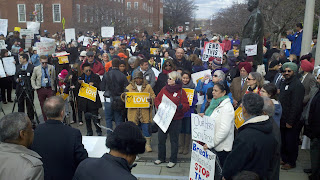 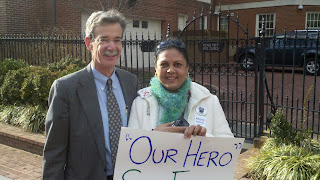 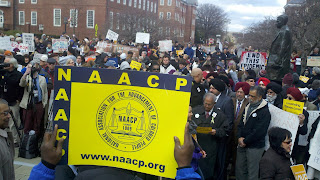 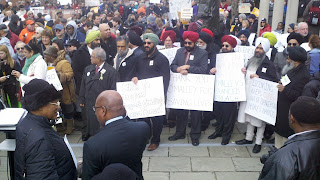 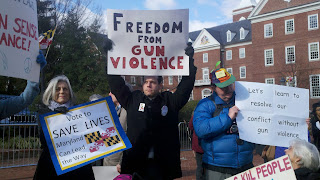 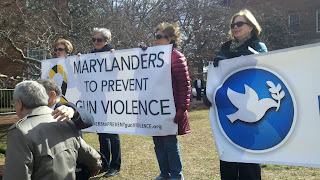 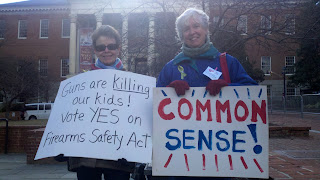 Posted by Practice Democracy at 12:31 PM No comments: 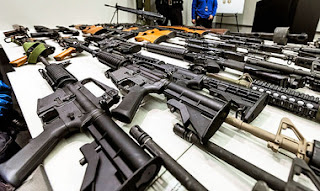 
Anyone wishing to purchase a handgun first be required to obtain a license to purchase the weapon from the state police.

Proponants of this legislation suggest this is the best way to reduce gun violence because it will substantially reduce "straw purchases," which occurr when people who are prohibited from owning weapons get someone without a criminal record to purchase the gun for them. Straw purchases are the most common way that guns end up in the hands of people who use them to kill other people.

The complete list of goals to prevent gun violence in Maryland are:

These are common sense measures that will not infringe on the rights of law-abiding citizens, or sportsmen that use hunting rifles or shotguns. These are responsible measures to take military-style weapons off of our streets and reign in the sale of hand guns by "straw purchasers" just before they are used in a crime.

You can do this easily by going to our website, www.marylanderstopreventgunviolence.org.  Please do your best to attend one or more of the community forums on gun violence being sponsored over the next couple of weeks by Lt. Governor Anthony Brown and Attorney General Doug Gansler.  Flyers for these events are attached and on our website. -- I will be representing Marylanders To Prevent Gun Violence on the panel at these events.

Finally, please attend if you can the hearing on the Senate gun violence prevention bills on Wednesday, February 6 at 1pm at the Senate Judicial Proceedings Committee in Annapolis.


According to The Baltimore Sun, the NRA is already holding meetings with lawmakers to discuss their strategy to defeat this legislation, using fear and misinformation to intimidate members of the Maryland General Assembly.

Posted by Practice Democracy at 4:55 PM No comments:

On Saturday November 3rd at 6:30 pm Light Brigade Maryland met up with Catholics for Marriage Equality Street in Baltimore Maryland. As the election approaches on Tuesday the polls are tight and excitement is growing. Maryland could very possibly be the first state to vote on a referendum ballot to approve the marriage between lesbian and gay couples. This vote will end the anti-marriage mantra that no state has ever voted in favor of marriage inclusion. The tide seems to be turning!

The following photos we taken by a vaiety of photographers and each of they retain copy right on their work. 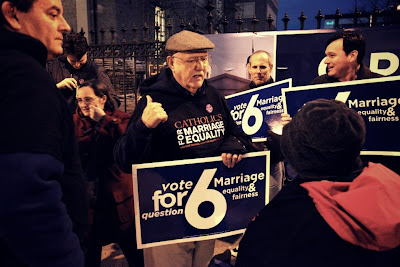 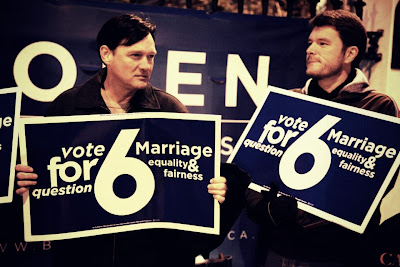 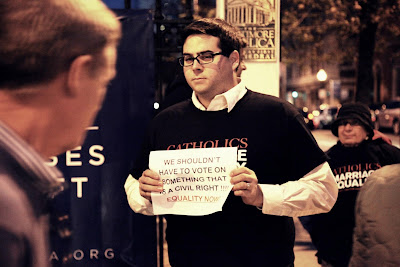 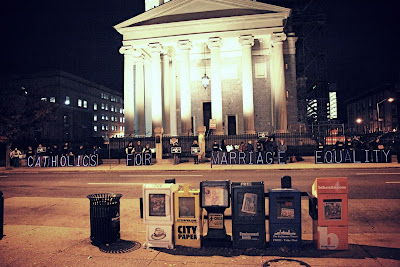 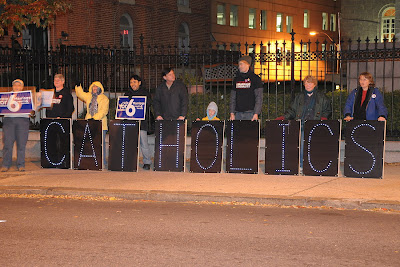 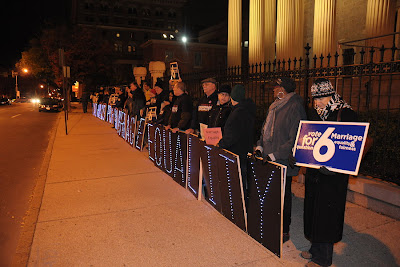 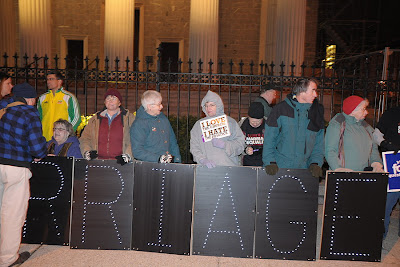 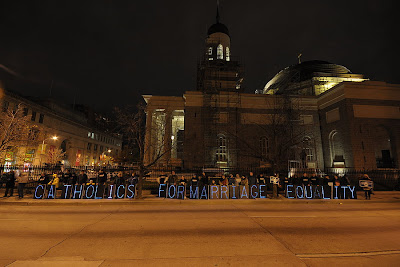 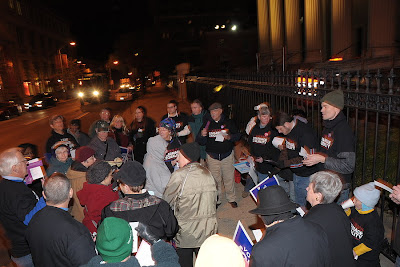 Posted by Practice Democracy at 6:20 AM No comments:

Promote Your Page Too

Pictures of My Work